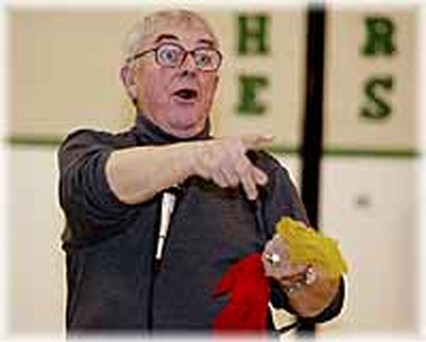 Dick Oslund is one of the top kid show magicians in the country.  He has done school tours for over 40 years.  That is 14-16 shows a week and a thousand miles of driving a week all across America. At over 400 shows a year, and 250-400 kids per show… well by my math he has probably performed live before more people than any other magician. Aside from school assemblies he has appeared at trade show, fairs, scouts and the banquet circuit for club gatherings.

He has lectured on kids show magic at I.B.M. and S.A.M. local clubs as well as national conventions. I first saw him lecture when I was a teen at the 1976 I.B.M. national convention. His ideas on magic and comedy are worth a serious look.

Mr. Oslund has a quick wit that grabs the kid’s attention and gets them roaring with laughter.  A show that stands out in my mind is when I saw him perform for a school audience of 350 kids in the late 1990’s. He had that bunch rolling in the isles, yet still in the palm of his hand the whole time.  There were moments of complete silence as they hung on his words and then sudden bursts of spontaneous laughter as he made the magic come to a surprising climax.

Every word and gesture had a purpose and there was no wasted moment or movement. He commanded complete focus of the audience from start to finish. I was also struck with the efficiency of the amazing tricks he did. They were very visual, and magical.  His magic tricks were amazing, with sleight of hand using coins, balls, silks and even a rabbit from the hat. The magic was direct and powerful.

From a backstage view, the other interesting thing is that he was so efficient and wasted no time.  He put each trick away as he was reaching to get the next one out. Yet there were no awkward pauses. He had jokes to cover the transitions and keep the show moving at a quick pace. This allowed him to have his suitcase of magic packed and ready to go by the end of the show. Often he was out the door of the school and into his car before the crowd completely cleared the gym. When doing 3 shows a day with 30-60 miles between each show, well you need to be efficient.  But there was never a dull moment. He had a place for everything.

A classic set of books in “magic for children” genre is the Kid Show Magic series. These are the books by Francis Ireland Marshall, produced by Magic Inc. in Chicago.  Volume #5 is a thick hardcover book that was state of the art for its time and is still an excellent resource. In this huge book you will discover Dick Oslund’s complete Environmental Themed show from the 1970’s. Few realize that Dick also did most of the writing for that entire Volume #5. This was one of the first series of books on the exclusive topic of children’s magic.  It’s well worth a look!

Dick Oslund was drawn to magic as a child, and then in high school began presenting magic at functions around his town. "All my friends were earning a few bucks bagging groceries and I was making $25 a night performing magic," he said. "All through high school it was a paying hobby."

This fun job of making people laugh helped him in the service. "I never cashed a Navy paycheck in four years," he said. He didn’t need to cash check he was doing quite well doing shows on and around the Navy Base.

The Navy offered a lot of travel and he met many magicians at the magic clubs around the country. "I had my whole show in a cigar box and got $20 to $25 for a performance," he said. "That was pretty good money in those days."

After the Navy he became a full time magician with his home base in Chicago. He was a regular at the Abbotts Magic convention and often guest starred in the Foxy Follies. This was the final night show, produced by Karrell Fox, that spoofed all the acts that appeared at the convention.

"People ask me if I buy specialty items, but everything here I bought at yard sales for a dollar or two,"

Oslund says that the secret of magic is simple. "It's 85 percent psychology, 5 percent sensory illusion, 5 percent sleight of hand and 5 percent esoteric science."

After all these years, Dick still enjoys bringing laughs to audiences around the country. He believes young people today live in a harsher world than ever before, making laughter and fun important.

"If you see someone who's not smiling, I say give him one of yours," he said. "We could all use a few more laughs nowadays."

Mr. Oslund is now 81 and spends summers in Michigan and is still very active volunteering in Scout camps during the summer months and he enjoys the winter in Florida.  Even though he is officially retired, he recently did a fill in as a replacement act for yet another school assembly tour. He is just enjoying what he loves to do, make magic and sharing laughter.

So he has not really retired. "You might say I've only slowed down a little," he said. "I can't quit this. I'm having too much fun." 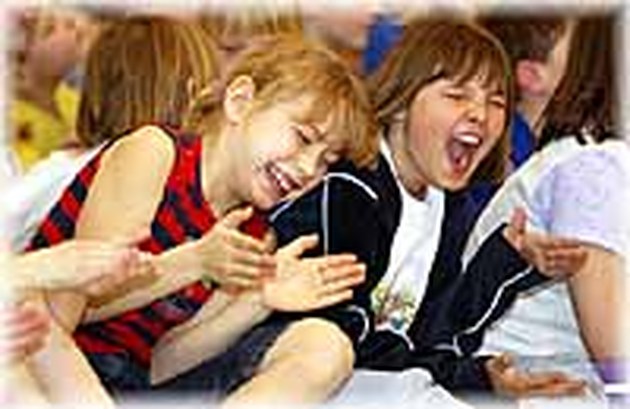 Kid's reacting to Dick Oslund's Magic show. From a newspaper in MN 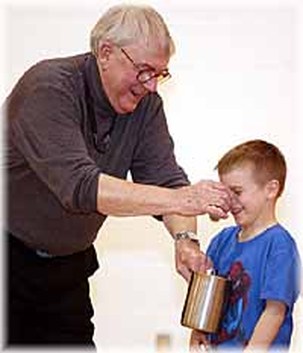 #1 - KISMIT  -  KEEP IT SIMPLE, MAKE IT FUN  - This is Dick’s basic philosophy that got him through over 60 years in show biz. When he considers adding something to the act, he thinks through it from many angles. Before making an addition or change to the act, he analyzes it to see if it would work under many conditions and for many types of audiences. Is it simple enough for youngsters to understand yet is amazing to the older kids? Is it foolproof so you can concentrate on the presentation?

#2 - Along with Keep it Simple is - Make it Fun!  The comedy and bits during the show add so much to the overall reaction from the crowd.  They love to laugh and participate. Look for slow spots and add some fun. When you keep their attention and interest with bits and gags, you will keep the fun going.

#3 - The show should be adaptable. You want amazing magic that can be done anyplace, for anyone.  Often school shows in the old days would have audiences of Kindergarten through 12th grade all at the same time. He kept everyone’s attention from the jaded Jr. High to the sophisticated Senior Class. His show could also play great to adults at the Rotary, Elks or other clubs and yet be adaptable to Scouts, schools and family nights. If it is good magic all groups will enjoy it.

Special Bonus Tip: Dick says “Study the art of magic and read the classics: Tarbell, Fitzkee on showmanship and creativity, and look for Kenneth Webber’s brilliant book Maximum Entertainment.  Understand the philosophy of why the magic works. This will make you a better magician.”

Dick recalls the story of a young and an old sailor watching ships going out to sea.  The young sailor says, “Man there is a lot of water out there.” The old salt says – “and what you see is just the top of it.” 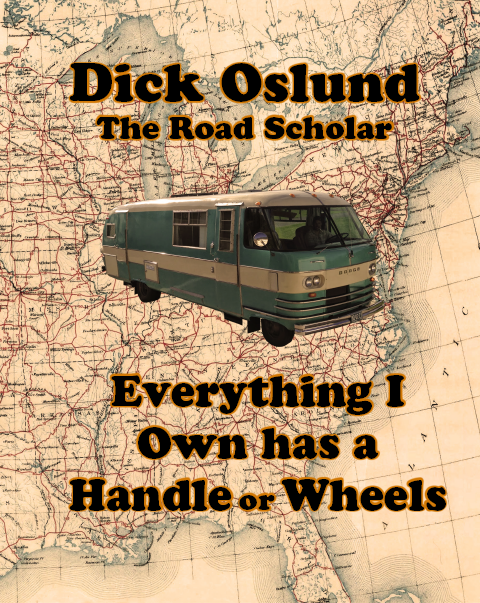 ﻿It is Here!!! - Dick Oslund's new book  - It's now Available from Dick Direct or at many fine magic shops such as Magic, Inc., Denny & Lee Magic, Abbott's Magic, Eagle Magic and Steven's Magic.
- Filled with his original magic and comedy routines for school, library, cub scout and family entertainers.
Rave Reviews of Dick Oslund's latest book....
"If you haven't had the privilege of seeing Dick perform, you may know him from MODERN COIN MAGIC, or KID STUFF V, or ABRAKAFOX (by Karrol Fox), but now Dick has his own book, entitled DICK OSLUND: ROAD SCHOLAR. This new 400 page book is packed full of great, relevant information about performing on the road as a Professional Magician, including Dick's favorite, time-tested Magic routines, practical advice and tips on performing and ENTERTAINING as a Magician, Dick's anecdotes about his wonderful life on the road, and much, much more. In fact, DICK OSLUND: ROAD SCHOLAR contains more practical advice for Magicians and tips more of the "REAL WORK" than any other book on Magic ever published!"
- Abbott's Magic

Here is a nice review on line by Jack S... at his blog.
http://jackshalom.net/tag/dick-oslund​_
Dick's wonderful new book is available in Hard Cover or Deluxe Paperback.
There is also a new DVD with Dick performing live at many schools in Wisconsin and across the U.S.
This book was published and put together by Norm B The Wisconsin Magician who tours in MN, Iowa and The Dakotas.
- more on Norm at: AboveEverything.com

Check out this cool article from the old days - (1970) about Dick Oslund  at:
https://news.google.com/newspapers?nid=1408&dat=19700108&id=n_QmAAAAIBAJ&sjid=_iQMAAAAIBAJ&pg=1050,2131095&hl=en
Magic Shows are fun for family audiences in Michigan, Illinois and Wisconsin.
Site Designed by: Magician-Minneapolis.com